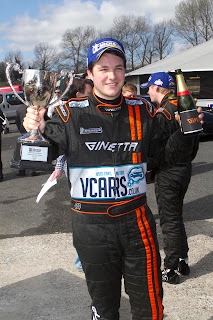 Camberley’s young racer Tom Sharp was raring to get back into the action, after his strong start to the season, in the Michelin Ginetta GT Supercup championship at the undulating parkland circuit of Oulton Park in Cheshire. The championship supports the Dunlop MSA British Touring Car Championship with its large crowds and lives TV coverage on ITV4.
After a very wet Friday practice day the Saturday morning 20 minute qualifying session took place on a wet and greasy track with drivers struggling to get good traction and therefore be able to set a competitive lap time. Sharp set the early pace with a quick two lap run to take him on pole but this was bettered by two other drivers, although he did try again to better his time. This left him in 3rdplace on the grid, but still in a strong position.
As Sharp commented after qualifying “We surprisingly struggled a little in qualifying in the damp but drying conditions. We initially set the car to do only 2 fast laps and then make adjustments but when we went back out the track conditions had changed slightly so we couldn’t improve”
The first of only two race’s at the Oulton Park circuit took place on Saturday afternoon in dry conditions, and saw a slightly cautious start to weekend as Sharp seemingly settled for third place having already built up a hefty championship lead. There were early opportunities to try and overtake the very experienced Carl Breeze but his race craft meant that he was able to defend his position to the flag.
In the 2nd race of the weekend on Sunday afternoon, after a strong start Sharp immediately started to apply pressure and began to challenge for second place. Again Breeze was ahead of him and didn’t give any opportunities to pass, even though that meant that the leader Ingram pulled away. In battling with Breeze this enabled the car of Hunter Abbott to catch the battle and make a pass at Sharp at the Island hairpin. The three cars were then nose to tail the entire race, with the cars of Hunter and Sharp crossing the finishing line virtually side by side. 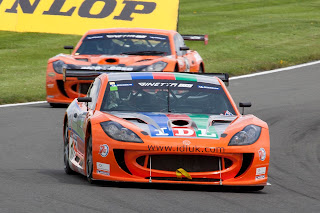 After the race Sharp wrapped up by saying “It’s a little disappointing to only come away with a third and fourth place, because I know that we had a car quick enough to challenge for the wins, but then again we haven’t lost much of our lead so well focus now on Croft in two weeks time.”
After the weekend Sharp leads the championship on 358 points with his next nearest challenger (Ingram) on 267 points.
The championship now moves onto the Croft circuit in North Yorkshire for a 3 race weekend with races on 23rd and 24th June.
_______________________________
Chris Roberts/WiderViewPhoto.com

Triple win for Sharp at Thruxton